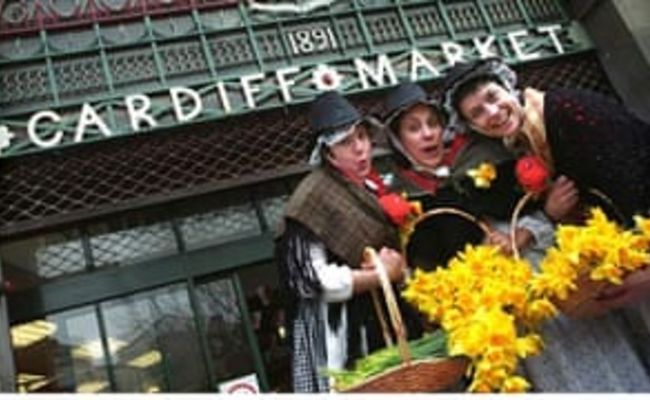 Visit anywhere in Wales on 1st March, St David's Day, and you will see children wearing traditional Welsh costumes or Welsh rugby shirts, or with a bright green leek or daffodil pinned to their top.

Who was St David?

Every year on the 1st March the Welsh celebrate the patron Saint, St David or Dewi Sant who died on that day in 589AD.    Born in the year 500AD, he was the grandson of Ceredig ap Cunedda, King of Ceredigion, and according to legend, he was born on a Pembrokeshire cliff top in a fierce storm.

Dewi was educated in Cardiganshire and from there went on religious pilgrimages across Wales and England, including one at Glastonbury.  He even travelled as far as Jerusalem where he was made archbishop.

He eventually settled in Glyn Rhosyn, now known as St David’s, the smallest city in the UK where he is buried.  Dewi was a teetotal vegetarian and he also ploughed the fields by hand instead of using oxen.  He is also supposed to have performed miracles; when preaching to a large crowd the people at the back said they could not hear him and it is said that he made the ground where he stood rise to form a hill.

The yearly event creates a party atmosphere in the centre of Cardiff and features performances from giant dragons and a rousing mass rendition of the national anthem, Hen Wlad Fy Nhadau.  The procession finishes outside St David’s Hall.

Everyone is encouraged to take part in the celebration of Welsh heritage and culture, meeting by Cardiff City Hall from 11.30am with the parade starting at 12.30pm.  The route takes covers some of the main shopping streets including Queen Street and Working Street and arrives on the Hayes where the anthem is sung at 1.30pm.

Free entry into all CADW sites

To celebrate St David’s Day the 16 CADW sites that usually charge admission offer free entry.  It is a great opportunity to explore the rich history at the heritage sites and take in some of the legendary monuments.

In Cardiff, you could visit Castell Coch, which is Welsh for red castle.  It is found in north Cardiff surrounded by a breath-taking forest.  The first castle was built by the Normans in 1081 to protect the newly conquered town of Cardiff and control the route along the Taff Gorge.    Over time it fell into disrepair but was restored during the 19th Century by the renowned Bute family.  It is now elaborately decorated and is filled with specially designed furniture and fittings.

Visit the National Museum of Wales

Adults who visited during the 80’s and 90’s famously remember the giant Woolley mammoth; however, art lovers know it for having the largest collection of impressionist paintings outside of Paris, including works by Renoir and Monet.  The elegant museum also has interactive natural history and geology collections, which children love too.

The museum is situated in the heart of Cardiff City Centre and offers free entry throughout the year.  On St David’s Day, you can take a walk through Welsh history in the ‘Evolution of Wales’ gallery and explore Welsh art.

Fuel your St David’s Day by trying some homemade, traditional food.  In Thomas Restaurant at Future Inn Cardiff, you can get 15% off items on the Taste of Wales menu.  This includes using local ingredients such as fish and lamb, as well as Welsh Rarebit or Cawl.  It is also an opportunity to try local drinks including Brecon Gin, Penderyn Whiskey and Brains beer.

Reservations can be made online here, or by calling 02920 487111 or by email to thomas@futureinns.co.uk.

Running until Saturday 2nd March 2019, the St David’s Day Craft Market is open from 10am-5.30pm on Working Street in the city centre.  The wooden stalls are all decorated with a Welsh theme as a colourful background to complement the fantastic selection of art, crafts, seasonal food and alcohol on offer.

A short walk from Future Inn Cardiff is the assembly of Wales building.  Open from 10.30am-5pm there are plenty of activities to keep the whole family occupied.  You could also see The Valleys Legacy Exhibition, on the theme of ‘What makes you proud to be Welsh?’ The photography and imagery focus on man-made and natural elements and observes rural, human, urban and industrial elements of society.

With unique attractions, top class entertainment, historic buildings and quality shopping – all within walking distance Cardiff is the ideal place to visit with the family, as a solo traveller or with your partner.  You can see our further recommendations on what you can explore when visiting Cardiff here.