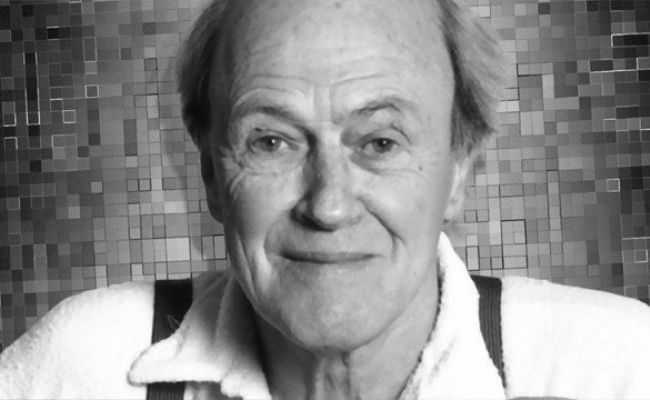 The 13th of September is Roald Dahl Day, a whole day dedicated to one of the world’s greatest storytellers. The unofficial holiday is celebrated every year on the anniversary of his birthday. He is famous for his Norwegian ancestry, but there is much more to this Cardiff boy.

We all know and love his books, including the famous Charlie and the Chocolate Factory, Matilda, The BFG and Fantastic Mr Fox. He is considered to be one of the most widely read and influential British writers of all time, he even wrote screenplays including the musical Chitty Chitty Bang Bang.

Who Was Roald Dahl?

Roald Dahl was a spy, an ace fighter pilot, a chocolate historian and a medical inventor – how cool was that?! Born in Llandaff a suburb of Cardiff on the 13th September 1916 to Norwegian parents, Harold and Sofie. He was named after Roald Amundsen, a Norwegian who had been the first man to reach the South Pole, four years earlier.

He joined the Royal Air Force at 23 years old, enlisting at the outbreak of World War Two. He received severe injuries to his head, nose and back when he crash-landed in September 1940, spending six months recovering in Alexandria, before returning to action. Later he was posted in Washington and supplied intelligence to MI6. 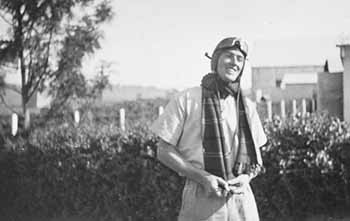 In 1953 he married an American actress, Patricia Neal, and they had five children together. They divorced after thirty years, and he later married Felicity Crosland.

His first book was published in the USA in 1961, James and the Giant Peach, and was followed by Charlie and the Chocolate Factory.  Roald then wrote screenplays for James Bond - You Only Live Twice, and Chitty Chitty, Bang Bang, as well as adult novels such as Kiss Kiss. As well as his successful books, Roald also enjoyed enormous success on television, having his stories told in six episodes of Alfred Hitchcock Presents Tales of the Unexpected in the 1980’s.

Roald Dahl died on 23rd November 1990, aged 74. He is buried in Great Missenden, the Buckinghamshire village where today The Roald Dahl Museum and Story can be found.

Want to know what to see when you visit Cardiff? Here are some points of interest that are all linked to Roald Dahl:

Found on Palace Road, was a pre-preparatory school called Elmtree House. It is now a private house, so please respect their privacy if you do visit. He went here with his sisters Alfhild, Else and Asta until he was seven years old. Roald recalled in his book Boy that it was here that he learnt to tie his shoelaces and the journeys to and from school on his tricycle.

Roald Dahl moved here after tragic family circumstances. In 1920, his older sister Astri died suddenly from an infection from burst appendix, followed weeks later by his father, Harald. Roald himself was so overwhelmed with grief he had pneumonia for a month or so afterwards. He described the house as a “medium-sized suburban villa”. Cumberland Lodge is now Howell’s School nursery.

The historic cathedral was founded in 1120. There is a lot to explore here, including the large and interesting graveyard, as well as Roald’s story. Aged seven, he went to Llandaff Cathedral School. It was an all-boys preparatory school. The site is now a group of houses known as The Cathedral Green.

On Llandaff High Street you will find a blue plaque on the site of a favourite sweet shop of the young Roald Dahl. In his autobiography Boy, he uses fascinating detail to describe the sweets that were on offer and what his pocket money could buy. He even wrote, “Without it, there would have been little to live for.” The old shop is now a Chinese takeaway. 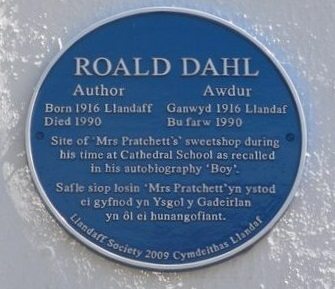 This is where the Dahl family lived, and in a first-floor bedroom of the white house, is where Roald was born. The house was then known as “Villa Marie”, Roald’s father, who made his fortune in shipping, had it built to his exact specifications before moving the family into the property.

A short walk from Llandaff is Pontcanna, where you will find playing fields and a residential area mixed with businesses. Along the long road, and side streets there are pubs, bars and restaurants, which locally is called the Pontcanna Mile. Roald Dahl had to visit the doctor’s surgery on Cathedral Road when he severed his nose in a car accident in 1925.

A 20-minute walk from Llandaff takes you to Danescourt, another suburb of Cardiff. It is here that a pink granite cross in St John's Church which marks the grave of his sister Astri.

While living at Cumberland Lodge, Roald struck up a close bond with the family’s gardener, and ex-miner called Jones. Roald once said, “One of his favourite subjects was the Cardiff City football team, and I was very quickly swept along by his enthusiasm for those heroes of the turf. Every Saturday afternoon, rain or hail or snow or sleet, he and I would go to Ninian Park to see the City play.”

The original Cardiff City ground has been demolished for housing, but directly across the road sits the new stadium which opened in 2009. The original gates, which Roald would have walked through still stand.

The Norwegian Church is one of the landmark buildings situated in Cardiff Bay. It is also where Roald and his siblings were christened. It was initially located between Bute West and Bute East Docks, roughly where the Red Dragon Centre now stands (opposite Future Inn Cardiff).

It is the oldest surviving church in Britain founded by the Norwegian Seamen's’ Mission. It fell into disrepair in the 1970’s, and Roald was at the forefront of a campaign to raise money to save it. Roald Dahl is one of the most famous members of the church’s congregation. 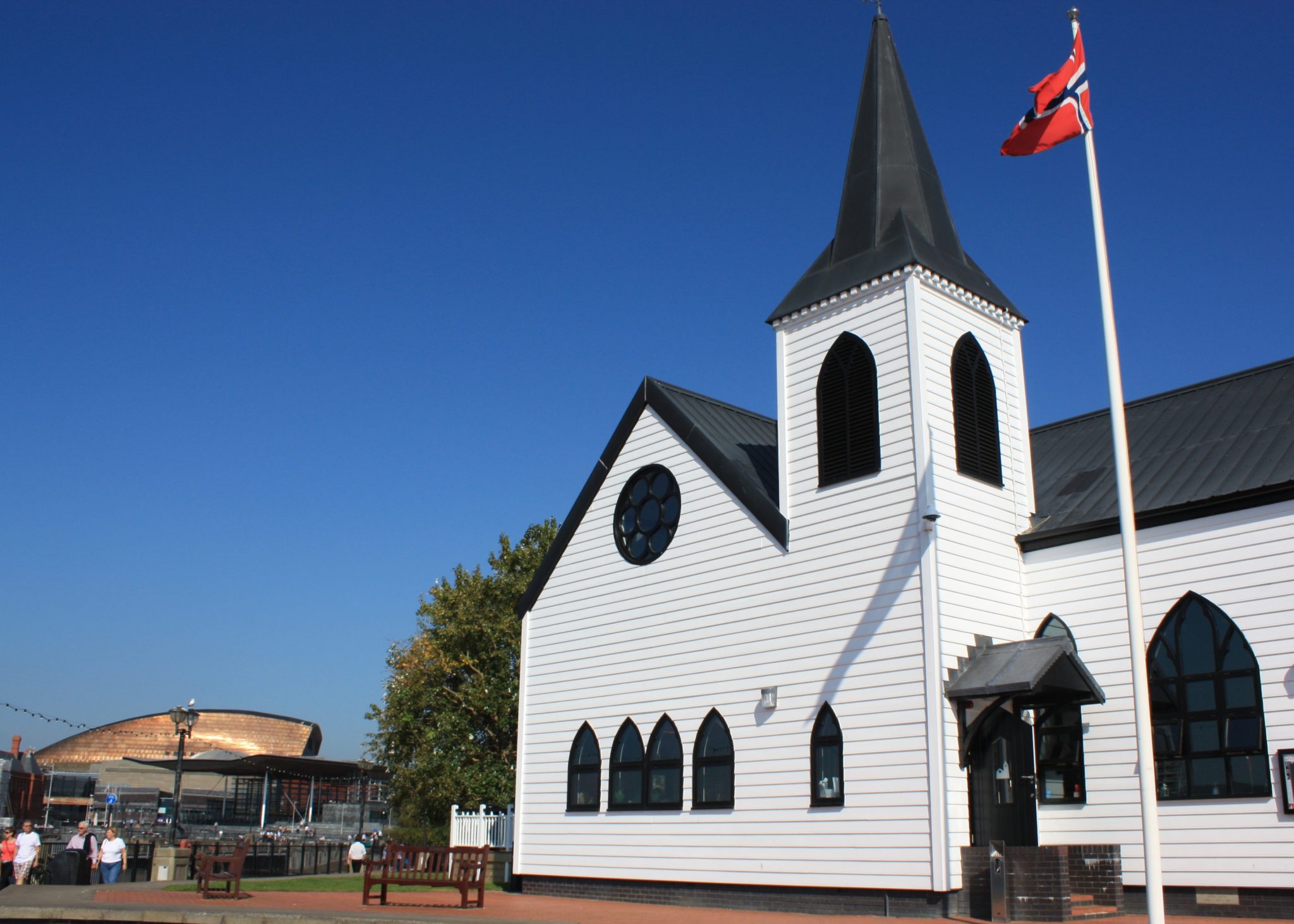 When in Cardiff Bay you cannot help walking through Roald Dahl Plass. In 2002 it was renamed from the Oval Basin in honour of the author. The Plass is home to annual events such as the Food and Drink Festival and the Cardiff Bay Beach. On quieter days it is the walkway between iconic buildings such as The Senedd and the Wales Millennium Centre.

While his father’s first office has now been demolished, you can see the former splendour of the coal industry. The Coal Exchange was built in 1888 and became a hub of the global coal trade. The first £1 million deal in the world was done here in 1904. Buildings nearby and on Bute Street also showcase the splendour of the coal industry in Cardiff.

The Cardiff Barrage is a pedestrian and cycle route around Cardiff Bay. The full path is a 10km trail which even connects with the nearby town of Penarth. You will pass locks, bridges and sluice gates and an Enormous Crocodile bench (or the Croc in the Dock) in homage to Roald Dahl. At the point, Dahl would travel on an old steamer ship from Cardiff Docks to Wester-Super-Mare where he went to boarding school. He would miss his family and suffer from homesickness. In his first term, he faked appendicitis and was sent home across the Bristol Channel. His kindly doctor let him have a couple days at home before sending him back to school. 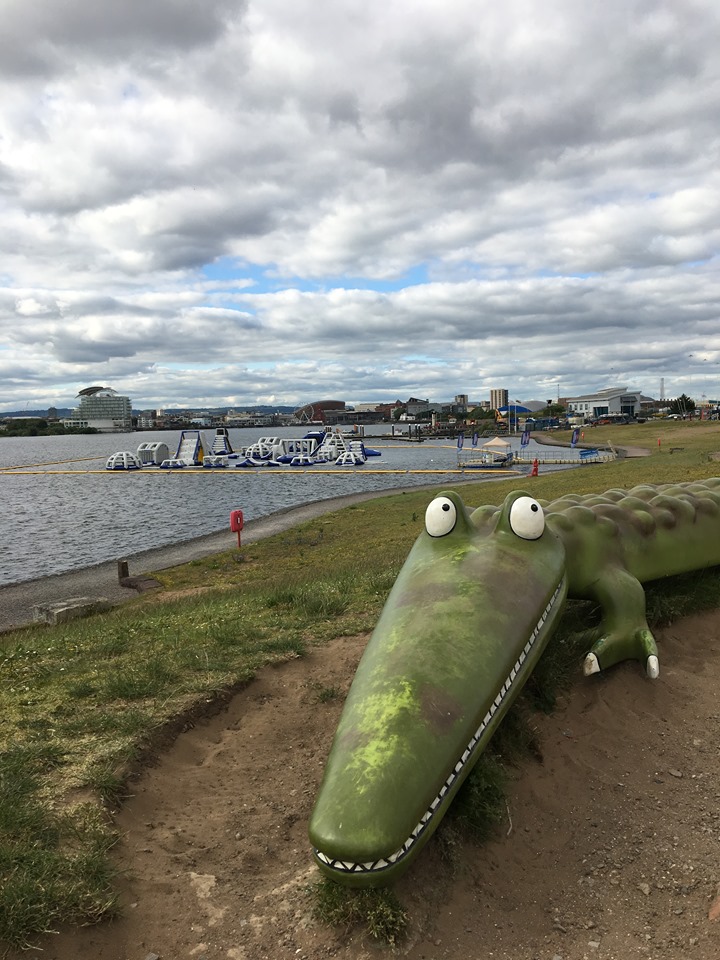 Future Inn Cardiff Bay is an ideal base for the night offering various sized rooms including ones that can sleep up to four adults or a family.  Perks include free car parking, free wifi and a complimentary robe and slippers. Book direct for the best available rates on our website or by contacting the Reservations Team on 02920 487111 or reservations.cardiff@futureinns.co.uk.

Thomas Restaurant is ideal to fuel up before the sporting event. Every day the team serve breakfast, brunch, lunch, evening a-la-carte or traditional roasts on Sunday. A homemade Taste of Wales Afternoon Tea is served daily between 1pm-5pm or our set menu offers 3 courses for £20 daily between 5pm-10pm. Under 5' always eat for free with a paying adult, and this is extended to under 12's during the school holidays.  A large selection of alcoholic and soft drinks is also available including Welsh beer and spirits, wine by the glass or the bottle, plus all cocktails are £7 each.