Nature Spots and Parks in Cardiff 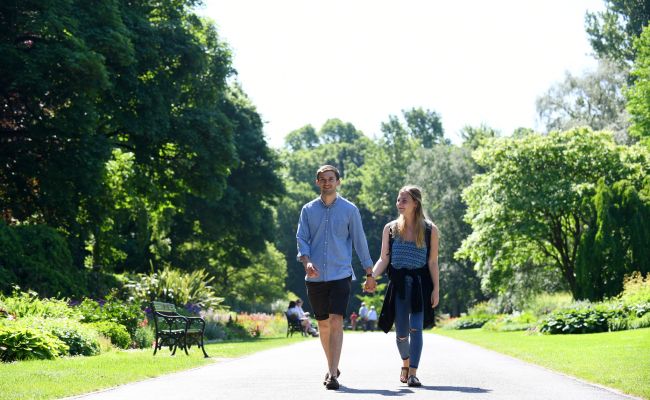 Unlike most major cities, Cardiff has plenty of fantastic parks and gardens. It also has local nature reserves and country parks. These open spaces are perfect for exploring Cardiff as well as stretching your legs, riding your bike and enjoying the fresh air.

Cardiff’s parks and gardens are beautiful. Each suburb of the city has its own recreational space, so you’re never too far away from a park. You will quickly forget that you are in the heart of a vibrant city, with its countryside vibes. Here are some of our favourite nature spots and parks in Cardiff:

The 19-acre Cardiff Bay Wetland Reserve is found on the northern shore, behind Techniquest and the River Taff. It is accessible via a gravel walkway and boardwalk. There are viewing areas that extend out over the freshwater lake.

In total the Taff Trail is 55 miles long, starting in Cardiff Bay and finishing in the Brecon Beacons. The Cardiff part of the trail, it is 9.5 miles (19 miles with the return journey). It will take you through Grangetown, Riverside, Pontcanna, Gabalfa, Llandaff North, Whitchurch, Radyr, Tongwynlais and Taffs Well. It is ideal for walking or cycling and is made up of old railway paths, forest paths and canals. 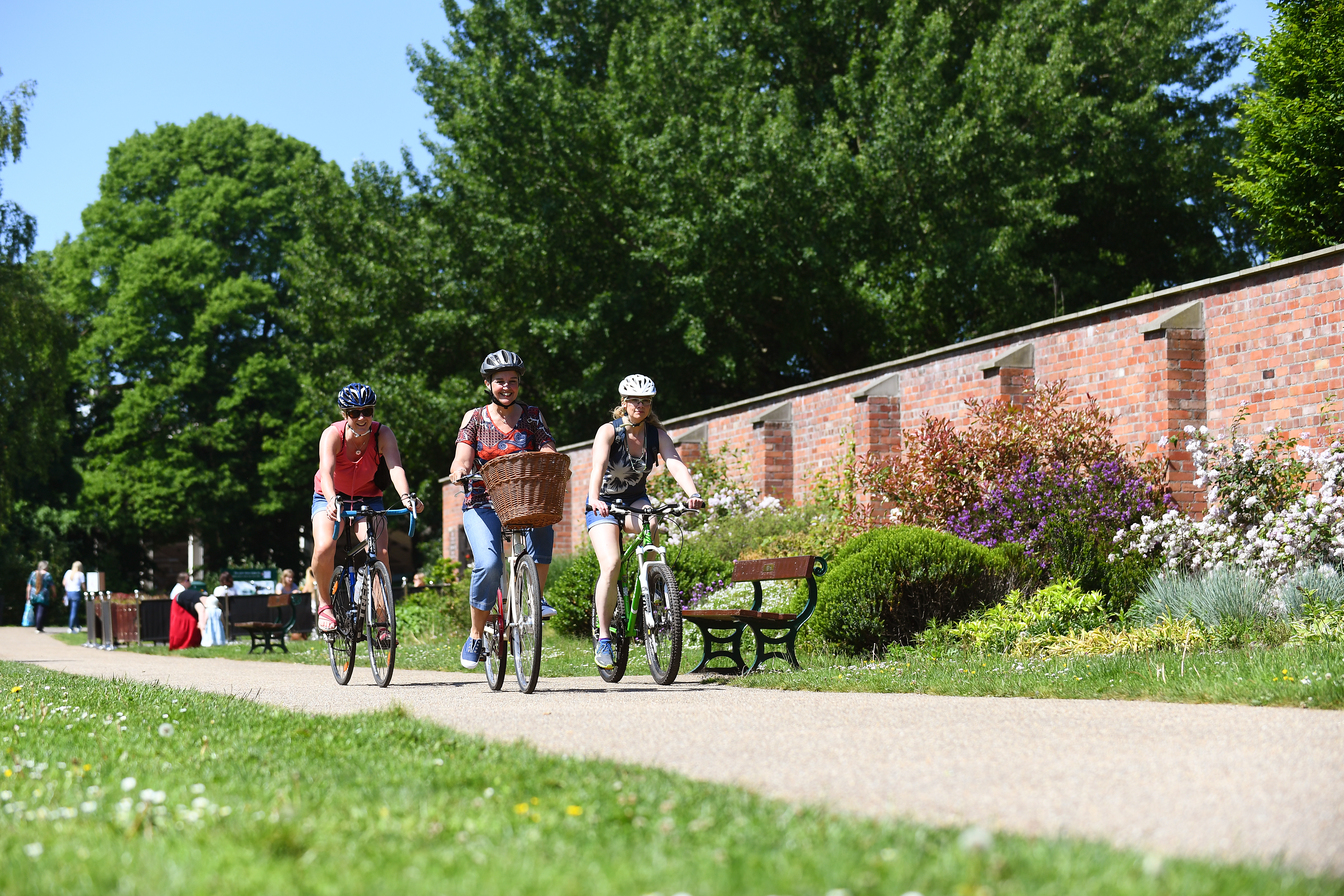 The green oasis is in the centre of Cardiff. Bute Park is a Grade I listed park. It is one of Cardiff’s premier visitor attractions, especially as its in the shadow of the magnificent Cardiff Castle. There is lots to discover; Blackfriars Friary, Arboretum with a mix of exotic and ornamental trees, the Animal Wall running along the entrance to the park, Gorsedd Stones from the National Eisteddfod in 1978 as well as a Sculpture Trail. 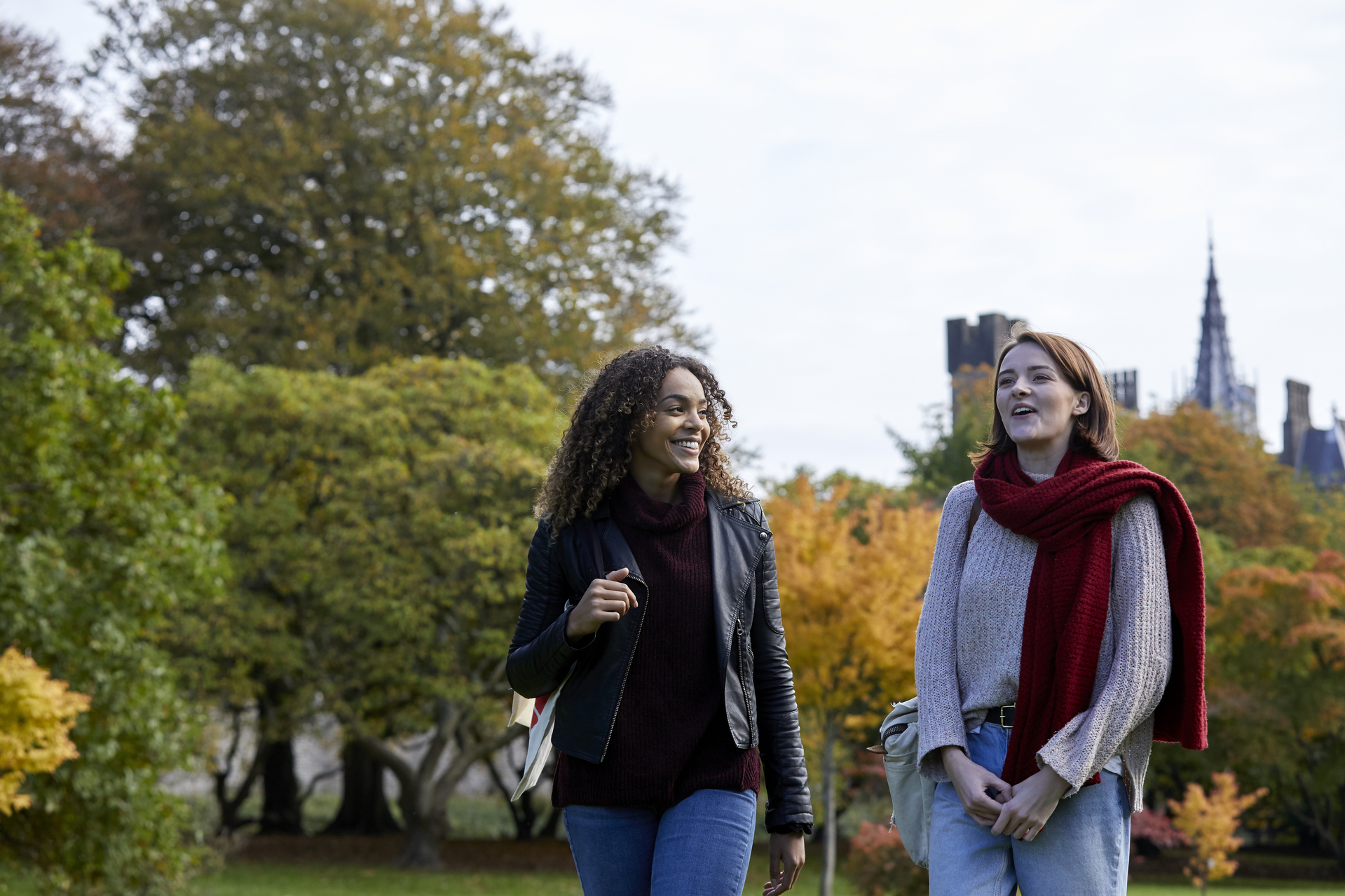 Formally Cathays Park was part of Cardiff Castle’s grounds. Here you can find high-quality formal gardens which include Alexandra Gardens, the Wales National War Memorial, Gorsedd Gardens and the Friary Gardens. You will also find some of Cardiff’s most impressive buildings such as City Hall, the National Museum of Wales and Cardiff University.

The 91-acre Heath Park has sport and playing facilities for all ages. There is a sports field, floodlit 3G pitch, and changing rooms. You can also pay and play pitch and putt golf, Footgolf and Footrugby. It also contains woodland areas, ponds and wetlands which has a wide range of plants and wildlife. It has been awarded a Green Flag status. With a link to it from Heath Hospital, is the Sensory Garden is a highlight.

One of Cardiff’s most popular parks, Roath Park and Gardens is recognised as one of the most beautiful late Victorian parks in Britain. It is a Grade I listed historic park and has been awarded a Green Flag. Each section of the park was designed for a specific purpose, explore the Wild Garden, Llandennis Oval, Botanic Garden and Pleasure Garden. Roath Park is where you’ll find one of Cardiff’s most iconic images, The Scott Memorial Lighthouse. Don’t forget to bring food to feed the swans, geese and other large birds! It’s recommended that you bring uncooked oats, rice, bird seeds, halved grapes, peas or sweetcorn, rather than bread. 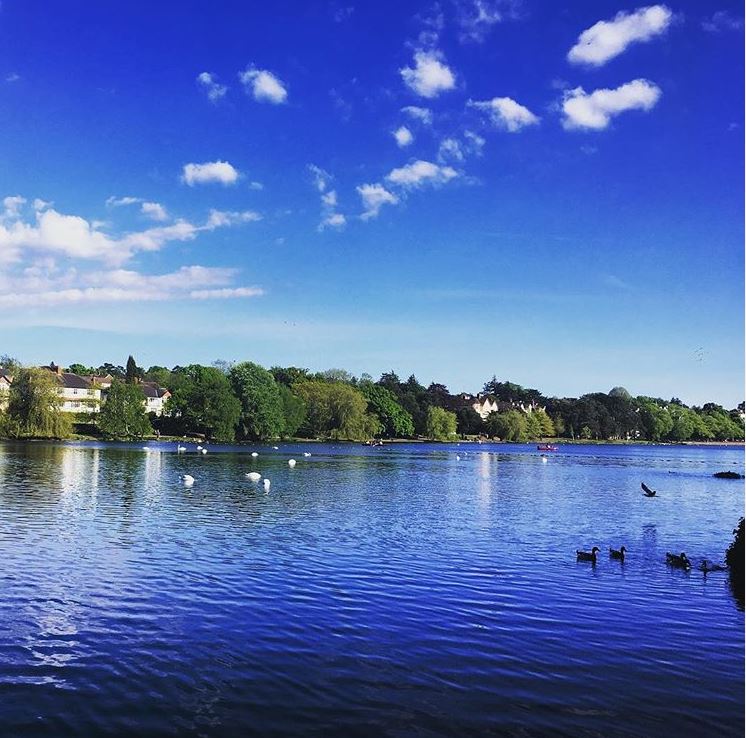 The Grade II listed Victoria Park can be found in Canton. It was named for Queen Victoria and retains much of its original charm. With flower borders, a cast-iron bandstand and fountain canopy, and children’s playground. The most exciting feature is Billy the Seal sculpture, the parks most famous resident, who died in 1939.

A small, attractive Victorian park in the heart of Grangetown. It was opened in 1895 and in 1998, after many years of decline, was awarded from the Heritage Lottery Fund. The park now has recreational facilities and a charming historic character.

The former landfill site, Howardian Local Nature Reserve has been developed into a wildlife haven. The 32-acre site includes woodland, meadow, wetland and ponds providing homes for more than 500 species of wildlife.

The historical park of Cefn Onn (pronounced kef-in on), is found on the northern fringes of Cardiff. It was designed as a Country Park with access footpaths to Caerphilly Mountain. Visitors enjoy the stunning scenery and the calm, relaxing atmosphere. In the upper part of the park, the winding paths follow the Nant Fawr stream.

Pontcanna Fields is a well-preserved urban park. It can be accessed by following the Taff Trail. It has an impressive range of sporting facilities including Sophia Gardens’ Glamorgan County Cricket Ground, National Sports Centre for Wales and Cardiff Bowls Club. Llandaff Fields is part of an extensive network of Grade II listed parkland. They are one of the city’s earliest public recreation grounds. Both are close to the Llandaff Cathedral and Insole Court attractions. 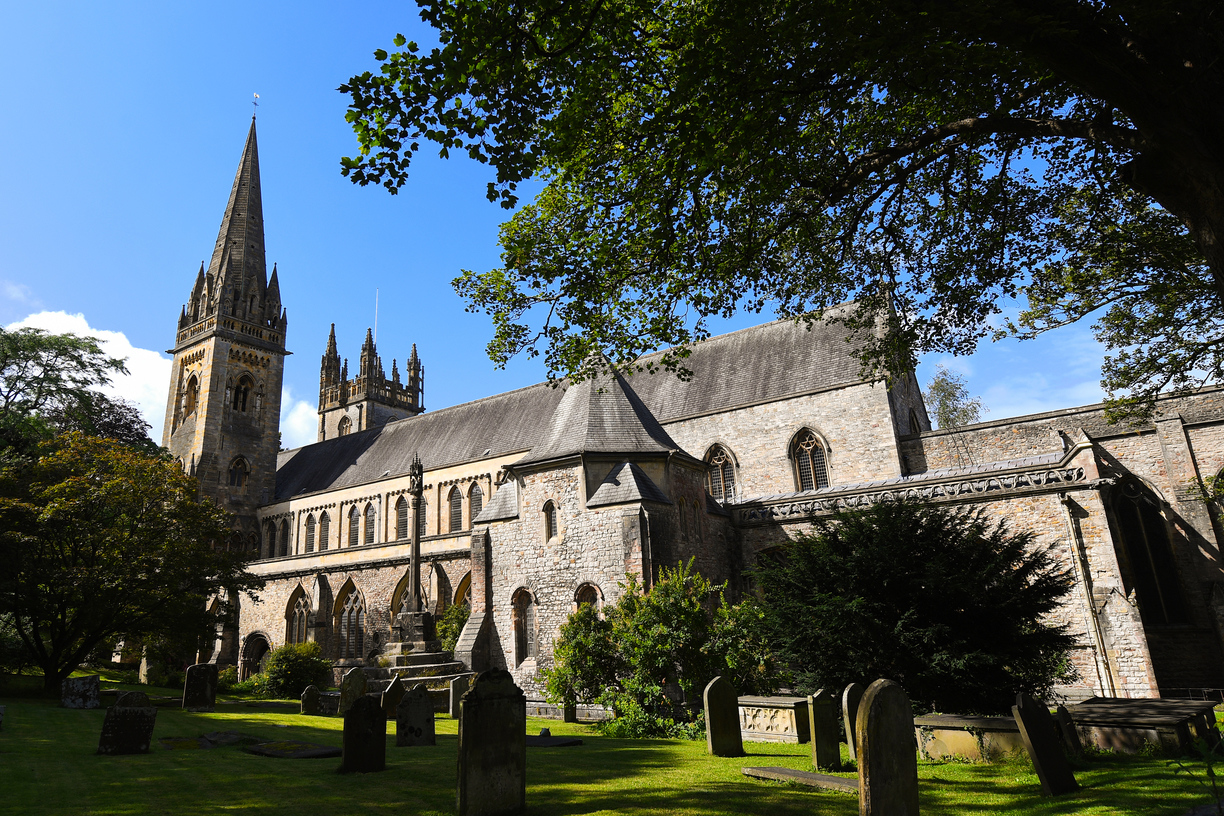 One of Cardiff’s oldest parks, Thompsons Park was originally a private garden. It was opened to the public in 1891. This is a Grade II listed park, has an iconic water fountain at its centre. It is a peaceful but popular place to pass the time of day.

In Llandaff North, you’ll find Hailey Park. It has a range of sports facilities including rugby pitches, tennis courts and play park. The Taff Trail runs through the site too. Hailey Park is home to the longest legal graffiti wall in Wales.

Forest Farm is full of surprises. Sections of the former Glamorganshire Canal still survive here. Other relics to Cardiff’s industrial past can also be seen including the Melingriffith Waterpump. The Taff Trail runs through the site too. Another highlight of the tour is the Northern Meadows. 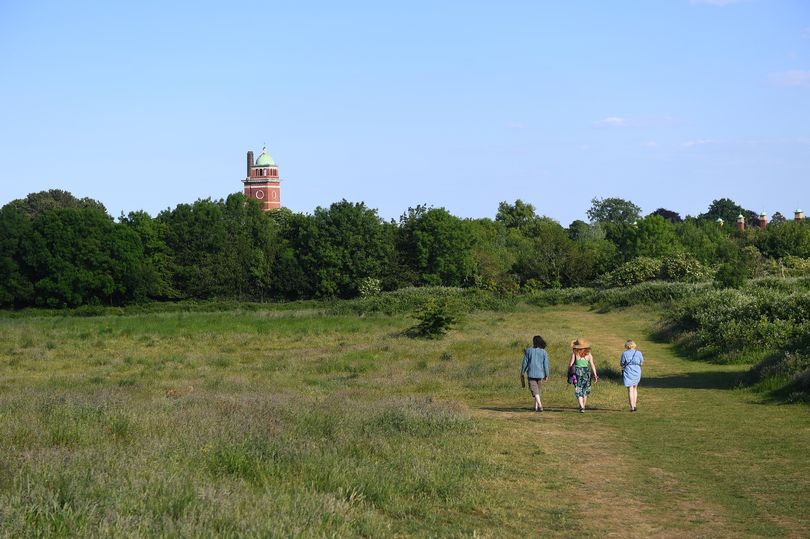 There are three heritage trails to choose from, a sculpture trail with wood carvings along the route, old mining caves and Castle Coch for touring. The mixed woodland is particularly spectacular in springtime when bluebells, garlic and wildflowers carpet the forest floor. You may even discover some of the hidden caves.

If you are looking for more of a challenge, The Garth Mountain is a pleasant hiking trail. The summit offers wide-ranging views that take in the Brecon Beacons on one side, and to the other panoramic over Cardiff. On clear days you’ll even see out to sea, spotting Flat Holm, Steep Holm and Western-Super-Mare. 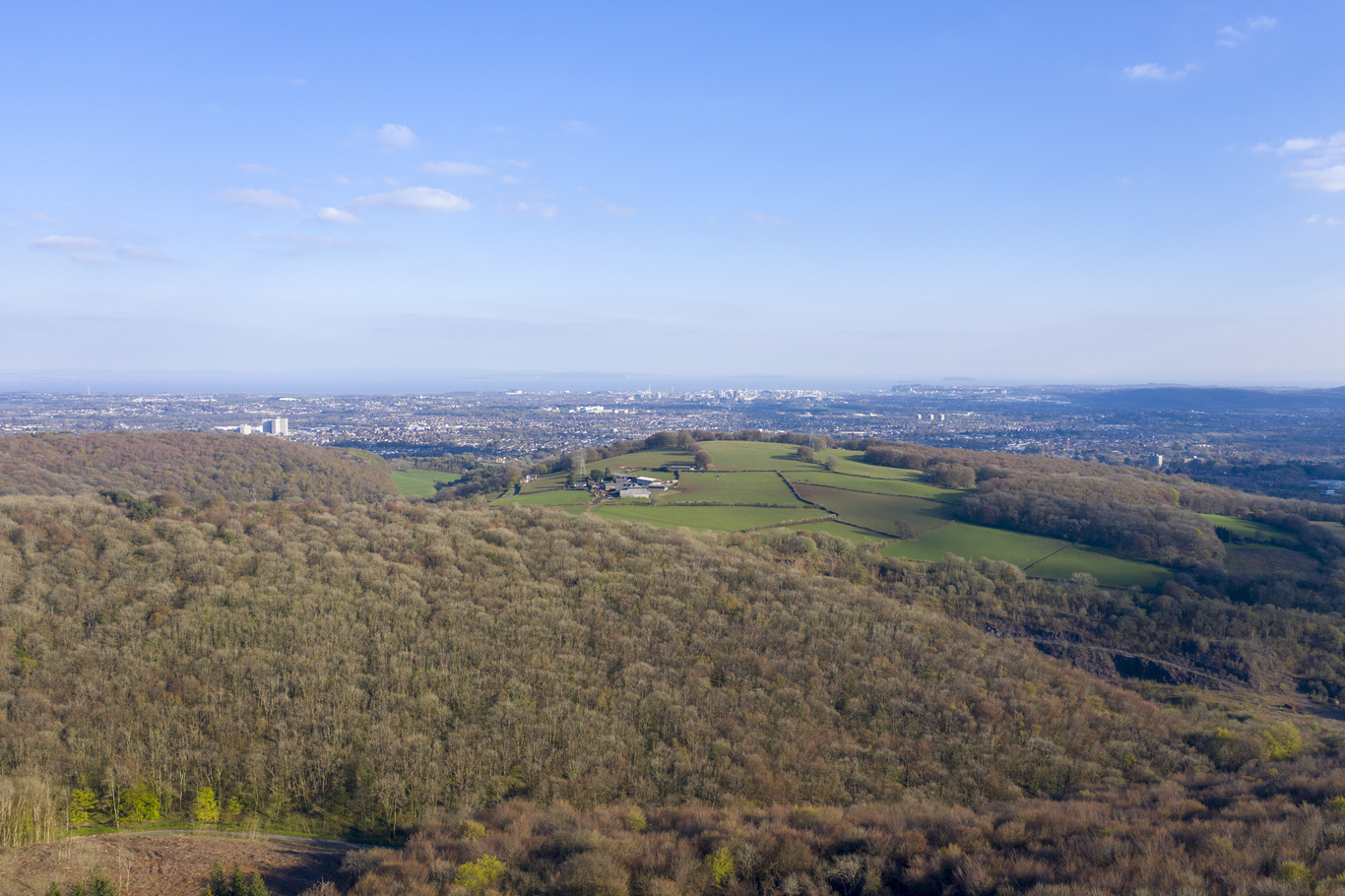 Also known as Coed-y-Wennallt, it is an ancient natural woodland in the north of Cardiff. The area is a well-known beauty spot popular for picnics in the summer and the incredible displays of bluebells in the spring.

A popular site for birdwatching and fishing Hendre Lake Park sits on 143-acres in the St Mellons area of Cardiff. The large, well-stocked lake is managed by Club Fishing Adventures Wales, and there are numerous fishing platforms. There is a circular walk and footpaths around the large lake.

Our hotel in Cardiff Bay is the ideal base for exploring the city’s parks and nature reserves. As a cycle-friendly hotel, we will also let you bring your bike, so you can enjoy the great outdoors on two wheels.

There are three room types for you to choose from, including our twins which offer two double beds. All bedrooms can sleep up to four, making them ideal for groups or families. All stays include free parking and free WiFi.

With our super flexible rates, you can book with confidence when staying at Future Inn Cardiff. Book direct for the best rates guaranteed on our website, or by contacting the Reservations Team on 02920 487111 or reservations.cardiff@futureinns.co.uk

Thomas Restaurant is an ideal place to sit in comfort and fuel up on local, homemade produce. Join us for breakfast, lunch, afternoon tea evening a-la-carte or traditional roasts on Sunday. Under 5's eat for free with a paying adult, and the offer is extended to under 12's during the school holidays.

A large selection of alcoholic and soft drinks is also available including Welsh beer and spirits, wine by the glass or the bottle, plus all cocktails are £7 each.

A rugby fans guide to Cardiff

Haunted places you can visit in Cardiff