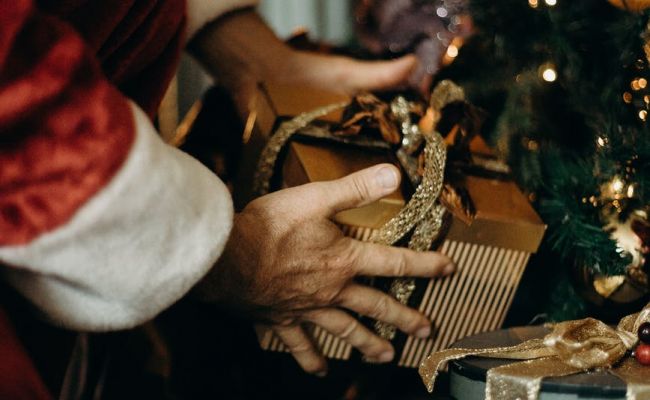 Celebrating Christmas is different this year - sorry to state the obvious. A COVID-19 Christmas means we are trying to decide who we will be bubbling up with, and which of our usual Christmas traditions to follow. We have delved into the archives to find some forgotten Christmas traditions, that you may want to re-introduce in 2020.

There’s not much longer to wait until we are celebrating Christmas. Whether we recognise it or not, we all have our own festive traditions. You may be sending Christmas cards, baking festive food, watching nostalgic films or singing along to seasonal songs. In the hotel industry, we mark the tradition with tinsel and all the trimmings, but how have local traditions impacted how you celebrate?

Forgotten Christmas traditions in the UK

The legend of St Nicholas

Whether you call him Father Christmas, Santa Claus or Siôn Corn (in Wales), St Nicholas was – is – a real person. St Nicholas was a monk born around 280AD in Patara near modern-day Turkey. He is said to have given away all of his inherited wealth and travelled the countryside, helping the poor and sick. He became known as the protector of children. Apparently, he was so shy that he gave families money secretly by dropping coins down the chimney of the home, which landed in stockings in the room below.

It is believed that carolling was invented in Wales, as for centuries something very similar has been taking place on New Year’s Eve. From dawn until noon, all around Wales, groups of young boys would go from door to door. They would carry three-legged totems, chant rhymes, and asking for Calennig, which is the gift of small change.

Originating with the Druids, this is an ancient tradition in the UK. Holly and mistletoe would be used to decorate the home. Both of these plants are considered to be good luck. While the reason has been forgotten in modern times, we continue to use them both in our festive decorations. In Norse mythology, mistletoe was a symbol of love and friendship, despite it being poisonous to humans. Holly was a fertility symbol and was believed to ward off witches and bad luck.

Instead of mulled wine or mulled cider, the Wassail is an elaborate bowl filled with spices and sugar then topped with warm beer. The Wassail bowl is passed around the party for all to share, and when taking a sip, custom dictates, the drinker should make a wish. In earlier times the wishes would be along the lines of a healthy harvest or good fortune for their family for the coming year, not this year’s most wanted toy.

If you hear the phrase ‘yule log’, there’s a good chance you thought of the chocolate sponge cake. However, the term comes from a tradition that originated in Scandinavia and does not involve the sweet treat. It also has strong roots in the West Country of England. A family would select a yule log to burn around Christmastime. When the log was burning, the no-one in the family would be able to do any work until it had entirely turned to ash, which was a treat.

During Elizabethan times, families would have fun playing the energetic game of shoe the mare. The rules were simple, a barefooted family member would run around acting like an unruly steed, while the other participants would attempt to catch them. If you have a large garden or live near a field or green space, this could be the perfect game to burn some calories or tire out excited children. It’s probably not a game for after Christmas dinner, when you are full.

There’s a good chance you know the lyrics to The 12 Days of Christmas without giving it a moments thought. However, it does have links to mince pies during this period of the festive season. Back in the Middle Ages, people would eat one mince pie a day from Christmas Day up to and including 6th January. They would be different fillings; a mixture of meats, fruits and spices such as cinnamon, cloves or nutmeg.

Again, it is alcoholic, so just for the grown-ups amongst us. Smoking Bishops was a popular tipple at Christmas during Victorian times. It even appears in Charles Dickens – A Christmas Carol. The drink in question was a steaming mug of port, red wine, cloves, sugar and oranges.

Will you be introducing new Christmas traditions?

Have you been inspired to alter your Christmas planning based on some of the traditions of previous generations? Whichever way you plan to spend the festive period, we hope you and your family have a wonderful time!

It is always Christmas when you work in hospitality. The plans are often done 12 months in advance, and enquires and bookings are taken throughout the year. Christmas and New Year themed party, and lunch menus will be planned and published, entertainment bookings secured and colour schemes are chosen.

Christmas is always an exciting time. We see families and friends meeting together in the restaurant to exchange gifts or to simply spend time together and celebrate. Of course, the festive menu, or a festive afternoon tea always helps to bring people together.

This year is a little different, but our staff always love the Christmas Parties. Seeing colleagues meet on the dancefloor and unite after working hard throughout the year. We also love to hear you all trying to hit the high notes as you sing along to Mirah Carey’s “All I Want For Christmas Is You”.

It is also great to meet so many different people staying in the hotel, travelling from all parts. Whether it’s before Christmas shopping, to be close to your nearest and dearest, or those who just want to getaway.

If you are visiting for the day or night, everyone at Future Inns hopes you eat, drink and be merry this Christmas.

How we get ready for Christmas

Give someone a gift experience this Christmas

Escape the everyday this Christmas