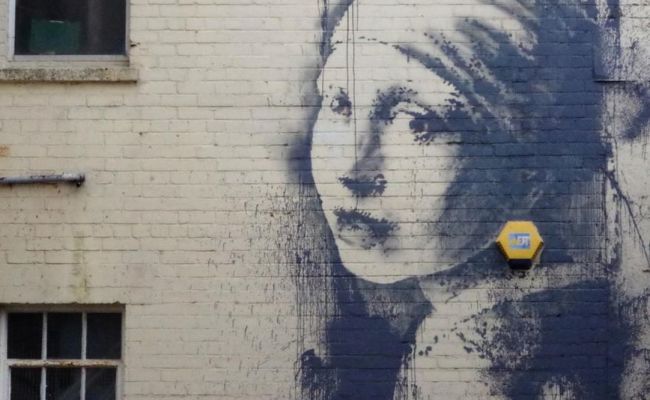 You do not have to walk far in Bristol to discover cutting-edge pieces of graffiti art decorating the walls. Along narrow alleys, down side-streets, across building walls and boldly displayed on bridges. Many of the pieces are by world-famous artist Banksy, who hails from Bristol.

Born in Bristol in 1974, Banksy was involved in the wave of street art that took Bristol by storm in the 1980s. Throughout the following decades, his work has cropped up in London, LA and New York, and of course, in his home town of Bristol. In 2009, Banksy held a spectacular homecoming.  Under complete confidentiality, he overtook Bristol Museum and Art Gallery for an exhibition that saw crowds queueing for hours on end for a glimpse of his work.

Before Banksy became a world-famous artist, he was just another Bristolian on the streets with a can of spray paint in his hands. Some of his earliest work is hidden around the city, and spotting it makes for a great self-guided walking tour. Many of the pieces are controversial, and Banksy is well-known for shining a spotlight on social issues and difficult subjects. 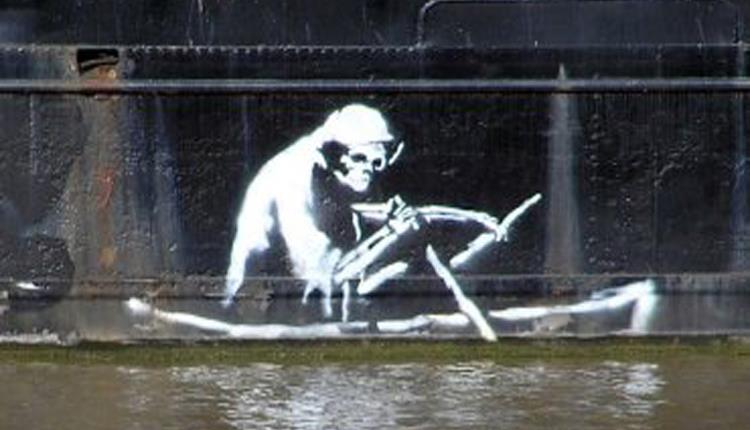 Banksy’s street art to look out for

One of the darker paintings is near the M-Shed Museum and harbourside, of The Grim Reaper. The white hooded figure is rowing a boat displayed outside the Bristol Life Gallery. It used to be on the side of a former cargo ship known as the Thekla, which was moored in the harbour.  It was too exposed to the elements and was deteriorating rapidly. It is now on a long-term loan to M-Shed, where you can also see Banksy’s Tesco Value Petrol Bomb poster on display in the Bristol People Gallery.

Passing Brunel's SS Great Britain, Aardman headquarters and looking over to see the coloured houses of Cliftonwood, is the newest of Banky's Bristol works.  The Girl with the Pierced Eardrum first appeared on the side of a building in Albion Docks in Hanover Place, in Bristol's Harbourside in October 2014. You can find it near to Bristol Marina, look out for the clock tower. 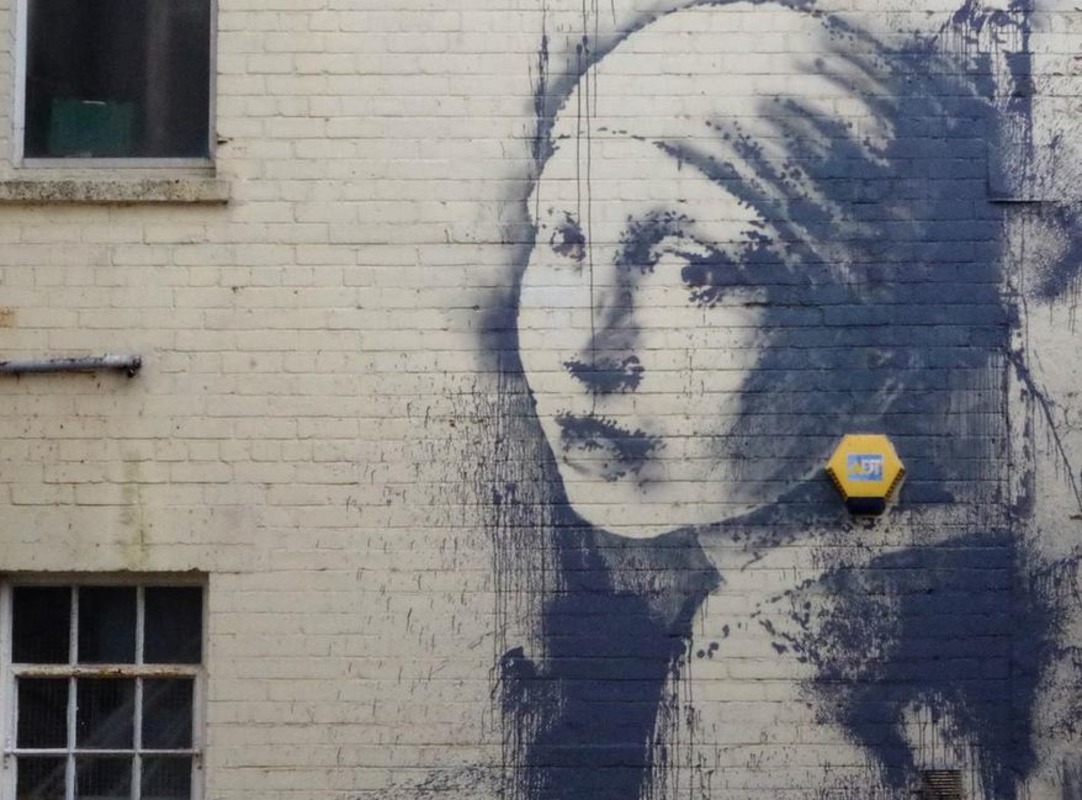 Another of the famous pieces is the artwork called Well Hung Lover, a naked man hanging from a window. It is actually on the side of a sexual health clinic on Frogmore Street. The best views are from the bridge at the bottom of Park Street that crosses over Frogmore. At the top of Park Street, in the foyer of the Bristol Museum and Art Gallery, is Banksy’s sculpture called Angel Bust, a statue of an angel with a paint pot on her head.

Stokes Croft, the heart of Bristol’s cultural quarter, is where you'll find plenty of trendy clothes shops, record stores and quirky boutiques.  Banksy's painting Mild Mild West is located next to the creative hub The Canteen. The whole area resembles an outdoor gallery with colourful graffiti that transforms the walls and buildings. 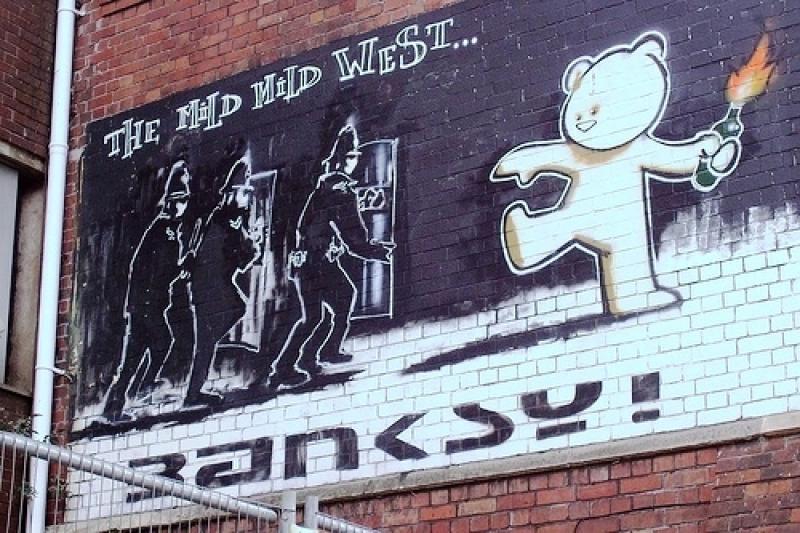 Slightly further out of the centre, in Easton where Banksy used to live, contains some of his oldest works and so is a mecca for enthusiasts. Cat and Dog – an early Banksy painting of a graffiti-spraying cat, being approached by two threatening dogs – is located on Foster Street, on a wall covered in fantastic street art by many different artists.

Again in Easton, along Fishponds Road, you will find his hugely popular Gorilla in a Pink Mask on a wall of the former North Bristol Social Club. It was mistakenly painted over in 2011, then partially restored and now appears as a ghostly figure looming out of the mist. 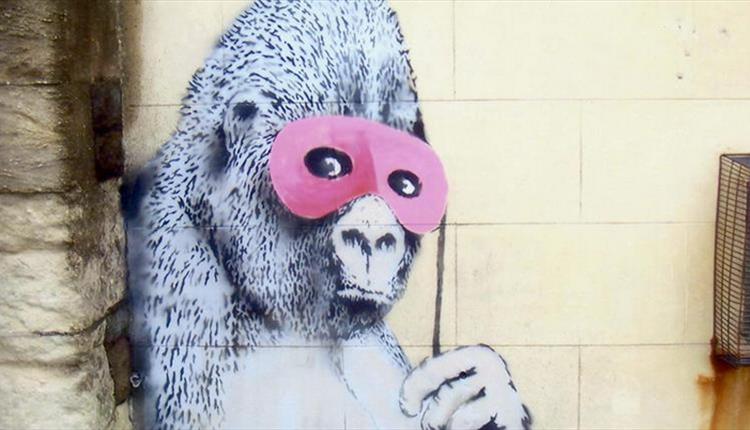 You can also download the fantastic Banksy Bristol Trail smartphone app (iPhone and Android versions available), featuring an interactive map which guides you to each of Banksy's remaining pieces in Bristol. It is also packed with in-depth features on Banksy, his work and his formative years in Bristol - a must for those who want to delve a little deeper.

In the heart of the city centre, opposite Cabot Circus, Future Inn Bristol is an ideal base for the night offering various sized rooms including ones that can sleep up to four adults. These rooms also can sleep a family, with under 12's stay free of charge. Perks include free car parking, free WiFi and a complimentary robe and slippers. Book direct for the best available rates on our website or by contacting the Reservations Team on 0117 304 1010 or reservations.bristol@futureinns.co.uk.

Chophouse Restaurant is ideal for fuelling up before the event. Every day the team serve homemade treats throughout breakfast, brunch, lunch, or an evening a-la-carte menu. Our set menu offers 3 courses for £20 daily between 6pm-9.30pm. A large selection of drinks is also available, including cocktails, all of which are only £7. Under 5's eat for free all year round, and the offer is extended to under 12's during the school holidays with a paying adult.

Future Inns are taking part in the online blog and article posting challenge #Blogtober which means we will be posting a different news article every day, creating new and exciting content for you to read throughout October.  Did you know? Every day between two and four million blogs are written, as well as a whole host of news stories, articles, reviews and interviews.